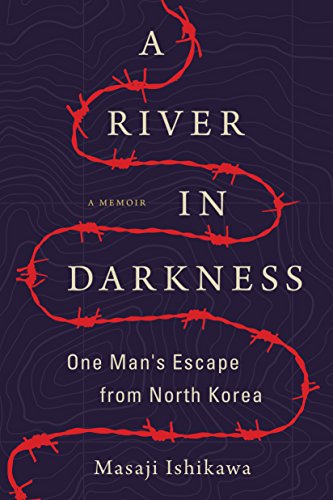 A River in Darkness: One Man’s Escape from North Korea is a heartbreaking memoir of Masaji Ishikawa’s life and escape from North Korea. This memoir is not for the faint of heart, nor is it for those looking for a happy ending. I found this memoir difficult to get into, but I am glad that I pushed through it to finish the memoir completely.

While I openly admit that I only knew the basics of how North Korea operated, this novel made things much more clear for me. Not from a historical viewpoint, as concrete facts and dates are few and far between, but from the viewpoint of someone who experienced it first hand. Not just a scholar who learned it through lecture. By not bogging the memoir down with dates it makes it much easier to see what happens as something the truly exists. It’s important to note that Ishikawa’s mother was Japanese and his father was South Korean. He was born in Japan and his father was conned through North Korean propaganda promising of a better life to move his family. Ishikawa mentions multiple times about how they were forced to use the Junche method when it came to farming rice. In which they were told to plant the rice close together. Those who were farmers knew better than to do this as it would lead to overcrowding and as a result a poor harvest. They had no choice and did as they were told, increasing the severity of starvation every year. Eventually the famine became so bad that Ishikawa, and many others, were forced to steal just to survive.

While I had hope that this memoir would end happily, this would be far from the truth. In 1996, 36 years later, Ishikawa would would escape across the Yalu River into China, but he would do so alone leaving his wife and children behind. The rest of his family was either dead or missing by this time. Through the Japanese Consulate managed to make it back to his homeland in Japan. Here, even his Mother’s Family refused to speak with him and he again found himself, jobless and without friends and family. He learned eventually that his wife had passed away, and in 2005 his daughter as well. He received a letter from his son 1998 , saying that he was looking for a job with his four children in tow. But this would be the last time that he heard from him as his letters abruptly stopped after that. He knows that if he had stayed in North Korea he is sure that he would have starved but he laments that “at least I’d have died in someone’s arms with my family gathered around me.” He closes out his novel saying, “people talk about God. Although I can’t see him myself, I still pray for a happy ending.” I hope that he finds one in the end.

iThere are no comments

Begin typing your search above and press return to search. Press Esc to cancel.